I figured it out. Took me a while…just bumpin along, doin my do, playin my songs, cookin the food, figurin all the while…thinkin, putting stuff together, rollin down the highway. Over a million miles, over 200,000 bowls of gumbo served for free. Over and over. I finally figured it out. This is how to take a tour. After five weeks on the road, I’m feelin better than I did when I left. Couple o’ years ago when I began this Quixotic one man band picaresque, I was not sure I could survive, much less make it work as a solo guy. I am now relaxing into the role. Or “roll”? Or both. Somehow the work and vacation have merged. Totally in the moment of creating music. I love it. Whatever the venue, the crowd was “spellbound”. Here’s how it went down. 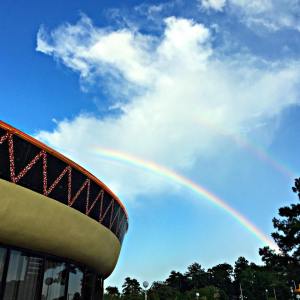 A sign from Heaven. You know it’s gonna be a good tour when there’s a double rainbow over South of the Border!

We were proud to attend the Pridefest in DC. We were all so proud of being what we are. Lots of proud people walking around bein proud.

Had to stop in at Madams Organ to see “One of the Greats”, Walter Tates! Left to right: Mr Tates, Trumpet player, Bouncer, and bouncee. Walter’s band, One Night Stand, has had the Monday gig at Madam’s for 17 years. They have the funk.

The best spaghetti I ever had. Franco’s in Williamsport, Pennsylvania 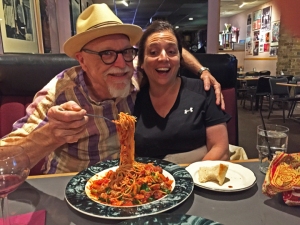 Maria made the spaghetti. She put the love in it. I don’t believe I ate the whole thing. Couldn’t stop.

Then Biscuit Miller and Dr. Love walk in and the cut loose cuts loose.

A crowd of 8000 at the Rochester Jazz Festival

JP Soars and the Red Hots joined me for an epic set at Balloons. The day before, I sat in with them. Great two day hang with the smoothest guys around.

Up a Creek in Warren, Ohio

With a day off in Pittsburgh, I had to see the Warhol Museum. One of the coolest museums I’ve been to. No photos allowed but I did do a screen test while I was there. Here’s a link: http://warholscreentest.com/v/AWM/Bill_s_Screen_Test-63570837943466 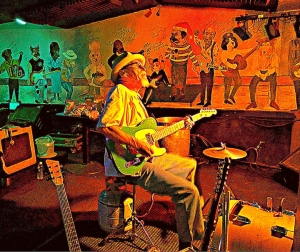 Playin up side the wall of dogs. That’s me…the dog with the chef hat and gumbo pot. Each dog has been signed by the artist at Moondogs in Pittsburgh. Pretty good company on that wall!

These guys were diggin it. Cleveland is aways ready for dinner. Wilbert’s!

Day off in Philly. Soakin up some culture at the Philadelphia Museum of Art for a show of Early Impressionists.

Then a concert. Brian Wilson. I came for the Front act: Rodriguez. 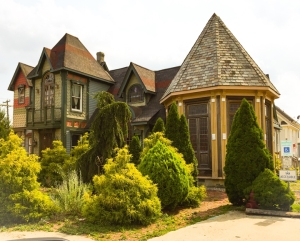 The Lizzie Rose Music Room. A Victorian house with the blues. 50 chairs filled with pure listening.

Beautiful inside and out, this is a great room to spend the evening.

Moonpie!
Berried in Black raspberries. 4th of July with Michael and Mary. 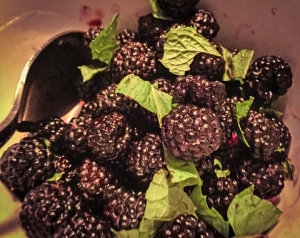 Mary made the best dessert ever. Black raspberries with mint, rum, Croatian grappa, and a drizzle of maple syrup. 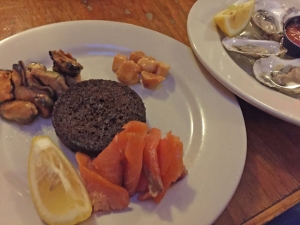 While in Maine, eat the seafood. Smoked scallops, mussels, and salmon with some raw, cold water oysters. Brown bread. Killin! 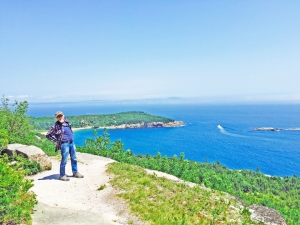 Pause in the hike to snack on the wild blueberries. 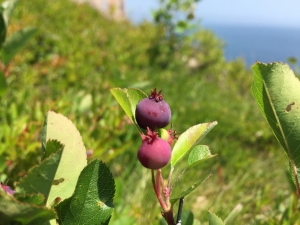 My trusty side kick, my manager, my squeeze, my Sancho. 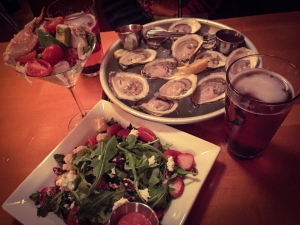 The Grand in Ellsworth, Maine.

Tremblant International Blues Festival. Last gig on the tour, but certainly not the least. This was my third time playing this festival. It gets better every time. They were ready for me. Fantastic tour! From a 50 seat listening room to an 8000 strong street festival, the vibe was filled with reverence for the music and for the sharing of the gumbo.

Kickin it in Canada with Ruthie Wharton. She has my back. (Photo by Barry McIntyre)

Foraging on the highway. If you’re ever in Downtown Albany, NY, Kinnaree has an amazing jungle curry with fresh black pepper corms.

One last stop at the beach to revitalize tired driving muscles. Soak up the minerals, then it’s home.

Thanks: Greg Nivens and the Trigger Agency, Walter Tates and One night Stand, Fred Danelle and Maria, (yum), Cloud 9 and Franco’s, Robert and Kenny Parker, Biscuit Miller, Dr. Love, Anita West, The Armor Inn Tap Room, Karl Takacs, John Nugent and the Rochester Jazz Festival, Mike Kerns et all at Balloons, JP Soars, Chris Peet, Steve Laudicina, Charles Gasper, Mark Matash and Up a Creek, Nick Conti, Moondog and Billie, Harold “Don’t forget to Boogie” Mursky and Sis. Mike Miller and Wilbert’s, Lou and Marsha Reichert and The Lizzy Rose Music Room, Mary Wharton and Michael Freedman, Loretta and Waylon, Gail Thompson, Kimberly Fitch, and Garrett at The Grand, Fritz Homas at WERU, Barry McIntyre, and Brian Slack and Tremblant International Blues Festival. The crews at all the venues. And also thanks to all who came to listen to my music and have a little dinner.