“Hot N Heavy” is HERE! ACT NOW! The new CD is out along with the new Hot N Heavy Peach Sauce.

The “Marquis de Swamp” says “Welcome to my habitat” over a sonaral bed of frogs, bugs, and who knows what crawled out of the swamp for this noir party. Wharton threw caution out the window with this album, as “Get Naked and Surf” suggests. Is “Lonesome Rider” a mid life crisis, or just a fond remembrance of one of his long motorcycle odysseys?

“That’s How It Feels” walks homeless streets, with the singer walking down the dark alleys of existence. Then “Gonna Be All Right” throws it right in the face of despair and shines a light over it all. “Don’t Know How To Tell You” mellows down into a smooth groove like coming home to Mama.

The title cut is a salacious double entendre with a raucous back beat suitable for lap dancing. Peppered in amongst the songs are grooves of the gumbo. “Okra”, “Andoulle”, “Hot Sauce”, “Chicken In The Gumbo” give the whole proceedings spice and contrast.

After serving free gumbo to over 165,000 hungry fans, after playing and cooking in homeless shelters all over the country, after twenty years on the road, the Sauce Boss is going for it. Blues/ rock/ gospel/ surf / zydeco/ swamp/ funk in a blender. It’s a mess o’ fun.

And if you are a radio DJ that has not yet received your copy of “Hot n Heavy”  send an email to info@sauceboss.com and we will send one right to you. Please send playlists there too.  We are happy to be getting great response for the CD from radio stations from Italy to France to Belgium and all over the US.

For those of you listeners who listen to one of the 103 radio stations airing nationally syndicated “Blues Deluxe”: one of “Hot n Heavy’s” song’s “Gonna Be All Right” will be on this week’s (March 21-27) show.  And help us get more airplay by calling your local blues and roots music radio show and request songs from “Hot n Heavy”.

HOT N HEAVY PEACH SAUCE
A few years ago we market-tested a sauce we called “Hot Q”. We have just recently tweaked the recipe and the packaging, and we are now releasing a fresh, new improved batch for all y’all. Everyone who had tried it is going crazy over it. Hot N Heavy Peach Sauce is the latest creation from the kitchen of Bill “Sauce Boss” Wharton. Although it is a great sauce for BBQ, its other applications are many. It can be used in soups, it can be a topping for seafood, pork, chicken, beef or beans and rice. It’s a refreshing salad dressing – sweet and tangy for stir-fry, and for dipping, it rivals Ketchup. Hot N Heavy Peach Sauce should not be over cooked because the peaches are so delicate, however it works great in a crock pot with chicken, or pork. For BBQ, wait until the meat is almost done to glaze it. Try chicken and ribs for an incredible edible, or even tofu. YUMMM!!!

Jeanie Thompson’s recipe is simple.
Throw 4 chicken breasts in a crock pot.
Cover em up with Hot N Heavy Peach Sauce.
Turn it on and go to work.
When you get home, it’s ready.

Hot N Heavy Broiled Mullet
Ah yes, the much maligned mullet. The Florida Seafood Assoc. tried to change the name to “Lisa” a few years ago to improve its image. “Trash fish” it’s called, but to its critics, I say this.   There’s nothing better than fresh caught mullet.   Here’s an easy, delicious, and so much fun, Sauce Boss recipe for fresh mullet with Hot N Heavy Peach Sauce slurped all over it.

Jus take yer mullet, son, and grease it up good with olive oil, , and throw it in the broiler. When it feels so good , it might explode, when the fish is almost ready to pop, when yer done doin what yer doin, slosh the Hot N Heavy all over it and stick it in one more time. I bet bet it only takes a minute to finish the job.  Feels so good. Rompin time guaranteed!

AND WE ARE PROUD TO ANNOUNCE OUR NEW SAUCE BOSS STORE !! GET ALL YOUR SAUCE BOSS PRODUCTS HERE At our new store, you now buy one bottle of sauce or a bunch. We also have several new package deals, with CDs and sauce, including a special deal on the new CD and one bottle of peach sauce. Be sure to check out all the specials we have. And if you have been wanting a Sauce Boss t-shirt, we have those too.

That’s right! Hot N Heavy is coming soon. If you want to be one of the first to get yours, you can pre-order it at our new SAUCE BOSS STORE. You can also pre-order our newest sauce: Hot and Heavy Peach Sauce. We have the recipe for a good time DOWN.  Yer not gonna believe how gooood this stuff is.  Our official release is March 23rd, but for our special  friends, we’re sneaking a few discs and bottles for early release parties.  Here’s where we will be in the next few weeks. Tallahassee, Gainesville, Jacksonville, Pensacola, Pelham GA, Coral Gables, and Melbourne.If you can’t make any of our Florida  and Georgia shows, you can listen to a live Sauce Boss show this Saturday night (3/6/10) at the BBC (that’s the Bradfordville Blues Club). Hank 99 FM is going to be broadcasting it live over the air and on the internet from 10:00pm to 11:30 pm.

Grouper Amandine a la Sauce Boss
1 pound grouper filet
4 Tbs olive oil
1/2  pound almonds chopped
2 Tbs mustard
2 Tbs Liquid Summer Hot Sauce
1 Tbs honey
Grease a cast iron frying pan with half of the olive oil
Slop the fish around on both sides coating it with the oil
Bake at 350 degrees
Mix remaining ingredients
When the fish is almost done, put the almond mixture on top of the fish and finish it off in the oven.
Serve with lemon

“Coney Island hot dog (also Coney Dog or Coney) refers to a hot dog made of beef with casing, topped with an all meat chili, diced onion and yellow mustard.  The variety is a fixture in Detroit Michigan, served there and in the “heartland” states of the American Midwest.  Despite the name, the preparation style has little direct association with Coney Island itself beyond recognition of the birthplace of the original hot dog… Coney Islands generally offer a choice of either Flint or Detroit style coney dogs.  Flint style is characterized by a dry chili more similar to ground beef than chili, while Detroit style is more soupy, heavy with chili and cumin powders.” So says the oracle, Wikipedia.

There is a debate raging as to which style and indeed, which Coney Island restaurant is the best.  In 1917, Gust Keros and his brother established the American Coney Island in Detroit.  Soon after they opened, an argument ensued, and they split the restaurant, starting a culinary feud which has lasted  the better part of a century. To this day, the Lafayette Coney Island and The American Coney Island stand in resolute defiance of one another, right next door, dishing out what each considers the best chili dog in the world.

I have eaten the Flint and  Detroit varieties, and I must say the slop, goop, mish mash, hot dawg soup of Detroit has my vote.  It’s like playin slide guitar.  You don’t want it to be too clean, to clear, too pristine. You need the proper amount of extortion in the amp. You want slop. You want the notes to blend together, like cane syrup and butter on a big stack of hoe cakes.  It’s this blending that galvanizes the rich overtones. Pure sound.  So it is with coney dogs.  I mean it’s three in the morning after a balls to the walls jamming set at the Greektown Casino.  Any body want a salad?  I don’t think so. 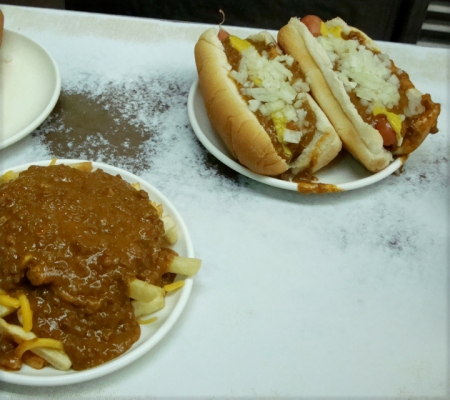